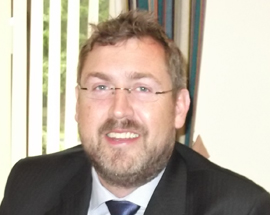 Dr Michael Reynolds has been a consultant physician and gastroenterologist at Basingstoke and North Hampshire Hospital since 2008. He trained at University College London and undertook specialist training at the Royal London and Royal Free Hospitals.

For three years he was a Clinical Lecturer at Barts and the Royal London Medical School involved in undergraduate medical education while gaining experience in ERCP and pancreato-biliary disorders as a Fellow at the Wingate Institute of Neurogastroenterology. He has gained a broad experience in functional bowel disorders and complex abdominal pain symptoms.

His particular interests are therapeutic endoscopy and ERCP including sphincter of Oddi manometry, gastrointestinal malignant disease, functional bowel disease and pancreaticobiliary medicine. He has considerable experience in the palliation of gastrointestinal cancers and is a Trustee of St Michael’s Hospice in Basingstoke.